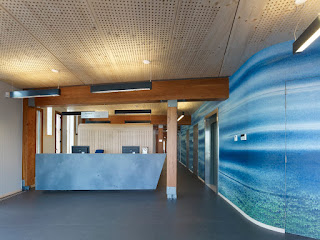 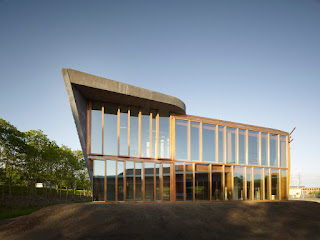 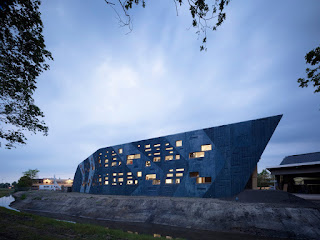 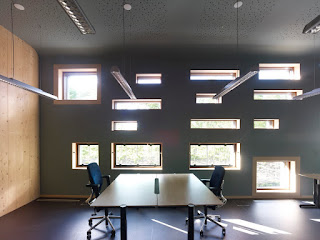 For Rijkswaterstaat, who are building and maintaining highways, waterways and nature, 24H-architecture designed the new districts head office along the highway in Assen, The Netherlands. The ambition of the client and the architect was to create a sustainable building that explicitly shows the identity of Rijkswaterstaat. The concept was developed with the idea to represent their three core activities and also integrate the typical ingredients of the site: The south facade of the building is brutally solid. Through its mass and its horizontal openings, the wall will block the heat of the sun and at the same time stop the noise of the next door highway. The facade, made of concrete and asphalt with lines and patterns, is an abstract representation of a highway. As the rainwater is directed from the roof over the facade, in time, the facade will become green as moss and plants will start growing. This way all 3 aspects of Rijkswaterstaat (road, water and green) are represented in this facade, that will develop in time. At the north facade a light wooden construction creates maximum flexibility and openness. This facade and its wooden beams form the base for the open layout of the office and the central void where employees of Rijkswaterstaat can meet and exchange knowledge; the social durability of the building. The green roof terrace also provides the possibility to gather. The design team looked for the best integration of all disciplines. All technical facilities are integrated into the prefabricated wooden walls and floors. This way an effective building time as well as a maximum of space is realized. The wooden floor will be directly used as a ceiling and the air will flow through the Climalevel system directly into the offices. With the Thermal Energy Storage, solar panels on the roof and the use of fsc certified wood, the building gets a class A level in the Greencalc calculation method and could also be classified as a BREEAM Excellent building.
Etichette: Architettura/Design News