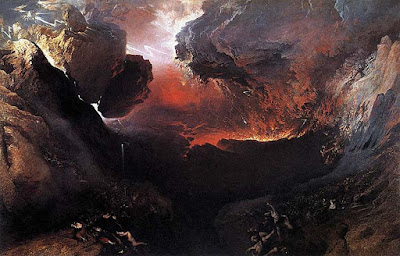 Visionary, eccentric, populist and epic, John Martin was a controversial but key figure in nineteenth century art. Like his canvases, this wildly dramatic artist with his visions of heaven and hell, was larger than life.

Organised in partnership with the Laing gallery, Newcastle, this is the first major exhibition dedicated to Martin's work in over 30 years. It brings together his most famous paintings of apocalyptic destruction and biblical disaster from collections around the world, as well as previously unseen and newly-restored works.
Hugely popular in his time, Martin was derided by the Victorian Art establishment as a 'people's painter', for although he excited mass audiences with his astounding scenes of judgement and damnation, to critics it was distasteful. In a sense ahead of this time, his paintings - full of rugged landscapes and grandiose theatrical spectacle - have an enduring influence on today's cinematic and digital fantasy landscapes.
This exhibition presents a spectacular vision, capturing the full drama and impact of John Martin's paintings as they were originally displayed. Just as in the nineteenth century, these epic and often astounding works must be seen to be believed.
Part of the Great British Art Debate, supported by the National Lottery through the Heritage Lottery Fund.