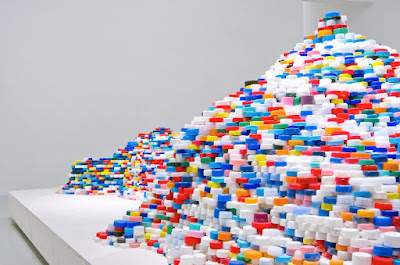 Plastic caps and golden beans for “nine years of existence”. That is what the Island of life, composed by Satoshi Hirose since 2001, is made of. A collection of caps from plastic bottles consumed in nine years forming a pile of recyclable materials, everyday materials against a small niche of hidden golden beans. The base supporting the recycle mountain is oversize as an art object: the visitor enjoys it in its entirety, having the chance of going round it, but, in the same time, is hindered from imagining it as a “sculptural host” of a space. The common thread in all of Satoshi’s installations is their “unsolved” but positive size, able to build a relationship with the viewer, putting him at ease by following the sensorial interaction at which the work aims. 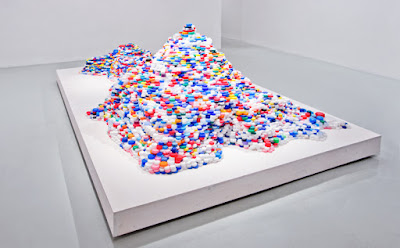 Around the Island there are pictures of everyday activities closed in a piece of chance reality: that of “situations and objects of no use”. A bit of Palomar’s life. The images unfold like in a Montage of Attractions without narrative time, that is the core of the plastic and gold Island in front of them. The day-to-day accumulation is contrasted with the chance fragment of the instant, and that with respect to the “manifold” nature of the expressive process of Satoshi Hirose’s art. 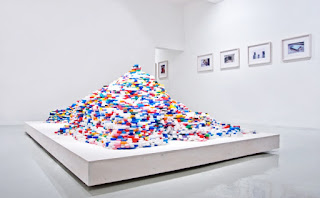