IBUg, in the Heart of Street Art! 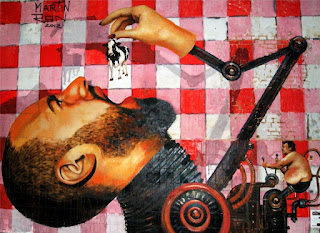 In order to remain unaffected by the commercial and academic influences of the time, a new art movement took shape in New York in the 1970s, the Street Art! Art was shown in the streets, storefronts and television. The big idea? To make sure it was widely available and affordable. Today the term can include traditional graffiti artwork, sculpture, stencil graffiti, Lock On´s, sticker art, wheatpasting and street poster art, video projection, art intervention, guerrilla art, and street installations. One of the most important European Street Art Festival is that one of Glauchau, in Germany (IBUg). This year this festival celebrated its seventh edition. From 24th August more than 70 artists from eight countries transformed a former slaughterhouse in the West Saxon city of Glauchau during a week-long creative phase into a work of art by graffiti, street art, urban art installations and performances.
The results have been presented to the public during the festival of urban art and culture from 31st August to 2nd September. Among the highlights of the weekend there were lectures by Göttingen based artist Bond about the graffiti culture in southeast Asia and by Manuel Gerullis, who talked about the event „Meeting of Styles“. On Saturday night the traditional IBUg party invited to celebrate and dance to hip-hop and electronic beats. 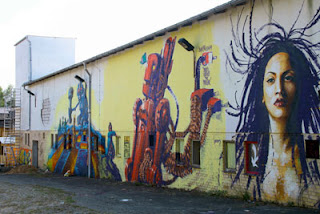 It was German artist Ta55o of famous Ma’Claim who had the idea to organise this graffiti and street-art event. It was supposed to be a kind of symposium, a place where artists meet to work, be creative and come together. IBUg represents an urban culture event that aims at bringing graffiti, street-art and installations closer to the public by embracing existing architecture, and concurrently establishing it as an independent form of art. In addition, derelict industrial grounds are revived to improve people’s awareness for art, culture and architecture. The organizers have said about the event: "Basically, art is a cultural asset and needs to be cultivated and developed at any time. We think that it is even more important to raise awareness of new forms of art, such as street-art and graffiti. These forms of expression have established in all parts of life. The fashion we wear, the music we listen to, the media we watch and read. So we take this cultural part of life to another area: the places where we work or at least to the places where our parents and grandparents have worked. Most of these rotten grounds wait to be burned or knocked down by somebody. We put these facilities back to life for two weeks and draw the public’s attention towards them. The experiences of the past years show that people – disregarding age or social standing – are enthusiastic about IBUg and the work of the artists".