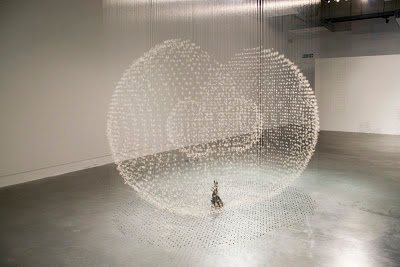 Claire Morgan's Gone to Seed, an enchanting sculpture created with thousands of suspended seeds, is at the Mac, in Belfast, until 20 January 2013.
Morgan's sculptural work is about our relationship with the rest of nature, explored through notions of change, the passing of time, and the transience of everything around us. All these characteristics give to her works such a zen appeal.
Both flora and fauna have been present in many of Morgan's recent installations. In 'Gone to Seed', we encounter what seems to be a controlled cloud of seed heads, frozen in the wind and rearranged into an orb-like structure. This form has then been fractured and split by a crow plunging through its mass, but much like the seed heads has also been frozen in time just before impacting with the gallery floor.
The artist says: “The processes involved in the work are laborious and there are thousands of individual elements involved, but clarity of form is of high importance. I do not wish the animals to provide a narrative, but rather to introduce an element of movement, or energy, or some sort of reality; animating or interacting with the larger architectural forms.” 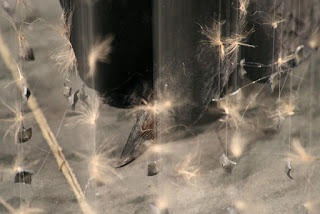 Claire Morgan was born in Belfast in 1980. She graduated in 2003 with a first class degree in sculpture and has exhibited internationally, with solo exhibitions in the UK and Europe and museum shows in the US and Australia.