Eulalia Valldosera, We are One Body 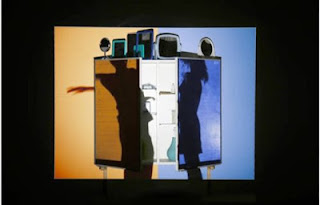 Until 26 November 2012 the Catalan artist Eulalia Valldosera will be in Naples at the Studio Trisorio with the exhibition  “We Are One Body” composed of videos, projections of light and shadows, photographs and objects, which tell about how family and sentimental relationships are conditioned by the feminine and masculine forces that are deeply rooted in each individual.
The exhibit includes the installations entitled “Mother & Father”, “We Are One Body” as well as a few photographs from the Family Ties series. In “We are one body” (2012) projects YouTube footage of the recent Greek riots onto an old clay urn invoking the heroic characters of traditional friezes from ancient Etruscan pottery. From inside a second large urn, amateur video footage exploring different theories of mystic geometry is projected vertically upwards on to the gallery ceiling. In both works sound is dislocated from its related image, altering perception and a sense of reality and meaning. In “Mother and Father” (2012), Valldosera presents shadowy figures performing love and hate rituals amongst a cast of personal objects - an engagement ring, a row of seedlings, underwear, hand mirrors, bathroom cabinets, weighing scales, a pair of tights – that alternately take centre-stage when lit by projecting beams of light. More everyday scenes unfold in “Family Ties” (2012), a series of seven photographs where layers of overlapping images of two interconnected families reveal - through the protagonists expressions and body language - the complex web of emotion and hidden motivations that underlie human relationships. 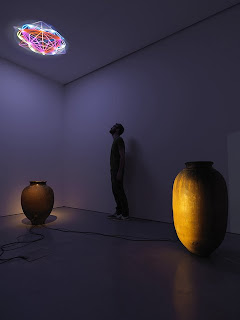