L.A. roads like a bamboo forest thanks to Stephen Glassman 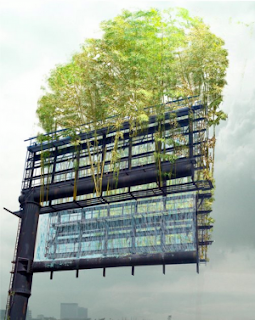 Urban forests growing where billboards stand: this is the last  Urban Air project realized by the American artist Stephen Glassman. The transformation is starting from Los Angeles, but that is just the beginning. Currently vying for funding on Kickstarter, the Urban Air project hopes to convert billboards around the world into bamboo gardens and it will not only help to beautify urban areas, it will also help process the carbon dioxide from cars below into oxygen, effectively cleaning up the air. After winning the 2011 London International Creativity Award, the Urban Air project found its legs thanks to Summit Media, a Los Angeles billboard company. To realize this work, first Glassman removes the traditional advertising elements to leave behind the skeleton of the billboard. Then he installs specially designed planters and fill them with bamboo, which will be watered with a special misting system. Next sensors and monitors keep track of air quality, temperature and other pertinent data.
"My intention is to put a crack in the urban skyline so that when people are compressed, squeezed, stuck in traffic and they look up, they see an open space of fresh air," Glassman said. The eco-artist is working on a full-scale prototype on a donated billboard but is looking for monetary donations to help him create "kits" for more billboards in LA and other cities. He has already raised over $18,500 on his Kickstarter campaign.
The sculptor has worked with bamboo in the public realm for several decades. After the Northridge earthquake hit Los Angeles in 1994, Glassman noticed that billboards remained even though freeways fell. Since then, his large bamboo installations have gone up in devastated parts of the city.