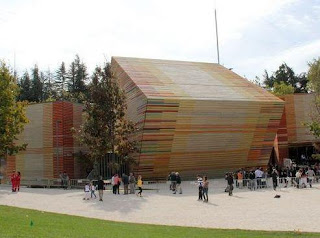 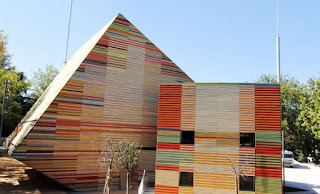 Is still unfit for use the magnificent  new temporary Auditorium in L'Aquila projected and realized by Renzo Piano in range of post-earthquake of 2009 reconstruction. The new structure was inaugurated  on Sunday October 7th, but it was still incomplete. Today the inhabitant of L’Aquila are still waiting for the completion of the interior part. The auditorium idea came about thanks to the efforts of Claudio Abbado, who, in the immediate aftermath of the earthquake, called for a solution to create a space dedicated to music, also involving Piano to allow a rapid recovery of that intense musical activity that has always characterized the city. Piano has always defined his auditorium as "ephemeral architecture", made of wood and not of stone and therefore also capable of being dismantled in the future. In fact the new auditorium, funded by the Autonomous Province of Trento was built with precious wood from Val di Fiemme: it’s a structure with 250 seats, three wooden cubes of different sizes located next to each other in an irregular manner. The central body guests the Auditorium Hall; the other 2 cubes guest general services for the public, the foyer with the bar, wardrobe, ticket counters and services for artists. A square connects the city and the Auditorium. Wood technology and anti-seismic building technologies are an example of “well building”.