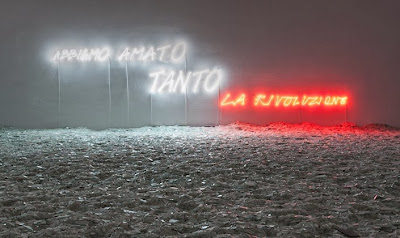 Fondazione Merz presents ALFREDO JAAR "Abbiamo amato tanto la rivoluzione", a major exhibition curated by Claudia Gioia and dedicated to the work of one of the most uncompromising, compelling, and innovative artists working today.
Specifically created for this exhibition, Alfredo Jaar’s new project plays on the idea of reflection (as both reproduction of images and thought or consideration) along the trajectory of his interest in the rapport between culture and democratic life, as he questions the sense of memory and political participation in the Sixties and Seventies. And he does so not as an act of commemoration, but rather to constantly engage in promoting culture as a decisive factor for change. 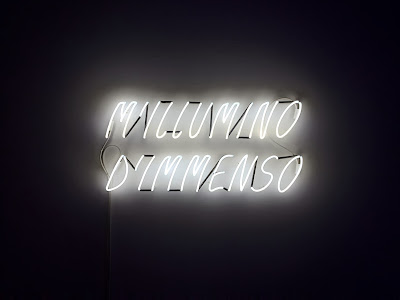 Consisting of about 60 artworks, the exhibition starts with a major installation that consist of millions of pieces of broken glass and mirror that cover most of the main exhibition space. As viewers walk on this reflecting surface of debris, they also move along the space of memory, and while engaged in self-reflection, they are invited to think over some difficult moments of our collective history. The remains of the lessons of history become the ground for hope and cultural rebirth. 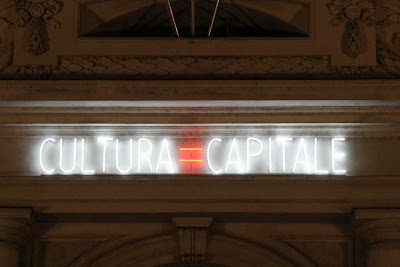 In a second space, the artist orchestrates a dialogue with a 1970 work by Mario Merz titled "Sciopero generale azione politica relativa proclamata relativamente all’arte", bringing it to our present times through a poetic and nostalgic mise-en-scene.


Alfredo Jaar is an artist, architect, and filmmaker who lives and works in New York. He was born in Santiago de Chile.
His work has been shown extensively around the world. He has participated in the Biennales of Venice (1986, 2007, 2009, 2013), São Paulo(1985, 1987, 2010) as well as Documenta (1987, 2002) in Kassel. Important individual exhibitions include The New Museum of Contemporary Art, New York, Whitechapel, London, and Museum of Contemporary Art, Chicago, as well as the Museum of Contemporary Art, Rome and Moderna Museet, Stockholm. A major retrospective of his work took place in 2012 at three institutions in Berlin: Berlinische Galerie, Neue Gesellschaft für bildende Kunst e.V. and the Alte Nationalgalerie.This year Alfredo Jaar is representing Chile at the 55th Venice Biennale. He has realized more than sixty public interventions around the world. He recently completed two important public commissions: The Geometry of Conscience, a memorial located next to the just opened Museum of Memory and Human Rights in Santiago de Chile; and Park of the Laments, amemorial park within a park sited next to the Indianapolis Museum of Art.
More than fifty monographic publications have been published about his work.He became a Guggenheim Fellow in 1985 and a Mac Arthur Fellow in 2000. In 2006 he received Spain’s Premio Extremadura a la Creación.
Etichette: Art/Culture News
Ubicazione: Turin, Italy