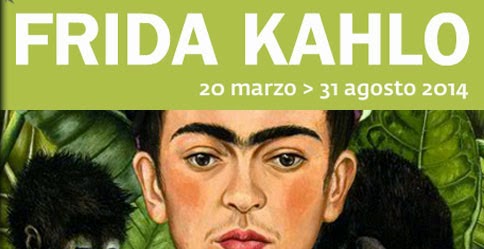 The rebel, the ocultadora, the sardonic pasionaria of art, is the very symbol of the artistic avant-garde and exuberance of Mexican
culture in the 20th century.


The exhibition at the Scuderie del Quirinale of Rome, explores Frida Kahlo's artistic career from start to finish, bringing together her absolute masterpieces from the most important public and private collections in Mexico, Europe and the United States: over forty fabulous portraits and self-portraits, including her extremely celebrated Self-portrait with Thorn Necklace and Hummingbird painted in 1940 which is on display in Italy for the very first time, and her Self-portrait Wearing a Velvet Dress 1926, which she painted at the age of only nineteen for her beloved Alejandro Gòmez Arias and in which her elongated neck recalls the aesthetic of Parmigianino and of Modigliani.

The exhibition is rounded off by a selection of drawings including the Sketch for the "Henry Ford Hospital" dated 1932, the famous Plaster Corset in which Frida was entrapped from 1950, the difficult years of her illness, and which she painted with a set of symbols. And lastly, a selection of truly outstanding photographs, in particular those produced by Nickolas Muray including Frida on White Bench, New York, 1939 which was later to become one of Vogue Magazine's most celebrated cover pictures.
Thus the overriding theme of the exhibition is the self-depiction which Frida developed by resorting to the artistic vocabulary of various different eras and which conveys the unique significance that it had for her in the transmission of iconographical, psychological and cultural values.