"SIRIUS. Where the dog is buried" Lehndorff/Trülzsch 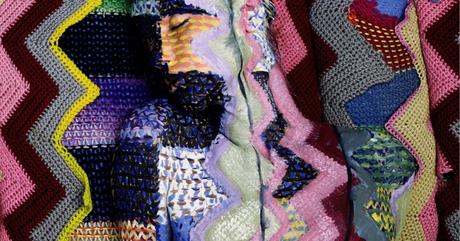 Exhibition of German artists Lehndorff / Trülzsch, which is part of the FOTOGRAFIA - Festival Internazionale di Roma 14th edition: THE PRESENT. They present seven large photographs and sixteen small polaroids about the 'bodywork' done by the two artists from the early years of their collaboration in 1970.
From 1984 to 1988, the artists Vera Lehndorff and Holger Trülzsch work to the series 'SIRIUS' (presented for the first time in 1986 to Bette Stoler Gallery in New York), a project carried out in Italy, in Prato, which takes its title from the homonym constellation, Sirius, also known as the Dog Star, the brightest in the night sky, the guidance of travelers. The subtitle 'Where the Dog is Buried' is coined for the first time on the occasion of the Scott Hanson Gallery in New York in 1988.

The photos are made in the background of stacks of colored rags, transferring the body of the model/artist becoming almost invisible. The exhibition is accompanied by a selection of Polaroids that capture the various moments of the work, as a full trace of the creative process.
A suggestion surreal, starting from the concept of found object, describes a metamorphosis as the body, merging with the background, the highlights, representing himself in something else.
In this sense, the viewer is invited to seek the essence of things and to go beyond appearance in a 'game of perdition' in which the desire to disappear becomes simultaneously to appear; the mask not only hides it reveals.